5 Reasons Why Evernote is the New Blackberry for Songwriters

With today’s musician always being on the go, they need a tool that can quickly capture their inspiration and organize their ideas without lugging around folders, binders and papers.  Blackberrys, which were once widely used by recording artists to write they lyrics, are no longer the mobile device of choice.

In this post you will discover my top five reasons why every songwriter and producer should consider using Evernote to organize and streamline their work-flow.

1. Makes it easy to collaborate

Evernote allows me to work in collaboration with one or more songwriters.  If I want to get an outside opinion or input from someone during the writing process, the ability to share notes and notebooks make it easy to do that.
Notes can be shared to Facebook, to Twitter, to LinkedIn and by email.  There is also an option to decide whether the recipient can edit the note or not.
It works even better if the whole team is using Evernote.  I can send things like audio loops, beat boxes, simple melodies and riffs as notes to my team and label them with tags like ‘ballad idea’ or ‘new album single’.  The person receiving it would then be able to easily add the note to their Evernote with the same tags so that we both stay in sync and organized.
Another valuable feature of Evernote is the email-to-note feature.  Each account gets an email address (like this: [username][email protected]) where emails that are sent are added as notes.  If an artist sends me a vocal recording to my email and i want to grab it out of my inbox (so that I’m not distracted with email while I’m in the studio) I just forward it to my Evernote inbox and add it my ‘beat ideas’ notebook for later retrieval.  You can also give this address away so people can send you ideas directly!

If you are like me, you have about 50 composition books worth of song or rap lyrics stashed away somewhere.  You refuse to throw them away because you never know when you might read them again and get inspired.
The great thing about Evernote is that you can scan images into it with either your web cam or phone camera and sort them out.  I’ve scanned in some of my cleverest lines from my composition book and added to them to my song lyrics notebook.   This has saved me so much time and space.  I no longer need to carry anything around with me but my phone to have instant access anything that I have written.
There have been multiple occasions where I’ve gotten inspired in the club and I came up with a really dope punchline.  All I do is ask the bartender for a pen, grab a napkin or a receipt in my pocket, write it down and stuff it in my pocket.  The next day or later that night I scan it in to Evernote so there is no chance of losing it.
If you are not used to writing on digital devices you can still save your work in to Evernote so that you can ball up and destroy those sheets of paper as soon as you’re done.  (You can also stash them away to be sold later on but I will get in to that in a different blogA regularly updated website or web page, written in an infor... More post.)  At the very least you should have your work backed up in case something bad happens!

3. It can record anything

With Evernote there are a handful of ways that you can capture your ideas on the fly.  As I mentioned before, I often use the camera to scan in pictures of handwritten lyrics.  But what I use most is the audio recorder.  In my opinion, it’s Evernote’s best feature for any songwriter.
As a producer I come up with crazy ideas at random times in my head and at a press of two buttons on my phone I am able to record them and save for later access when I’m in the lab.
If stumble across a really dope old school record on Youtube that I want to sample, I use Evernote’s chrome extension to quickly bookmark the video and add it to my notes.
Sometimes I come up with a few bars and a crazy flow so I’ll not only type in the lyrics, but I’ll record myself rapping them and then murmuring the flow that I want to use for the remainder of the verse.  (If you don’t want to look crazy in public, I’d advise finding an empty stairway or bathroom to do this lol.)  Multiple files types can be added to one note so you can do this.

There are two ways to organize your notes in Evernote.  Notebooks and tags.
Groups of notes can be added to ‘notebooks‘ and groups of ‘notebooks‘ can be added to ‘notebook stacks’.  For example, I have a notebook named ‘beat ideas’.  In that notebook I have bookmarked YouTube videos, mp3s, hummed melodies and beat box recordings all as notes.  So when I’m in the lab and I need inspiration, I open up that notebook up and I’m good to go.. This saves me a LOT of time.
I use a note tagging system that makes my workflow even faster.  See, each note can be labeled with tags.  The notes that I have in my ‘beat ideas’ notebook are tagged with things like ‘beat ideas-beatbox’, ‘beat ideas-to sample’, ‘beat ideas-soul’, etc.  That way when I need to make a certain type of record, I can quickly pull up any ideas that may fit what I need to make.
By tagging your notes with descriptive labels and organizing your notes into to notebooks, you can find anything in a matter of seconds using Evernote’s search feature.   It not only searches the note titles, tags and notebooks but it also scans within the note for what you’re searching for.
When I’m in the studio and need to come up with a verse quickly, I search for words in my ‘song lyrics-unfinished’ tag.  I have a lot of random lines stored in there that I can open up or close a verse with a bang with!

5. It can go everywhere I go

Evernote’s app works great across smartphones, tablets, laptops and desktop devices.  You can access and use it online as well from your browser on any of those devices.  No matter where you are you have access to your personal library of work.
On my android phone I have an Evernote widget on my ‘Songwriting’ screen that allows me to add a blank note, an audio note and a picture scan by just touching one button.  The widget also displays my last few notes in my ‘song lyrics’ notebook for easy access.  There is no fumbling around on my phone to capture ideas on the fly and everything that I do is instantly synced across all devices! 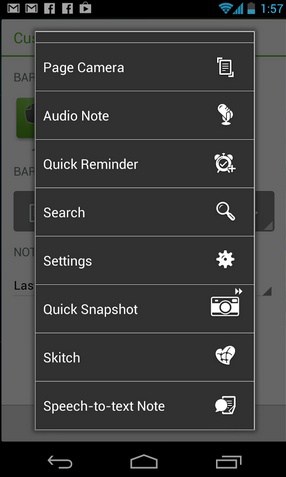 I rely heavily on Evernote for my songwriting and production ideas and it’s proven to be very reliable.  Not having to worry about carrying around books and papers to your sessions or forgetting an idea that comes to your head are luxuries that every songwriter or musician should be taking advantage of.
Sign up for Evernote for free now
Would you like a course on how to implement Evernote?  Send me a message for more details.

Bryan "Don Suave '" McNeil-Walker is a marketing strategist and music producer. Through his digital marketing agency Alavon365, Bryan has generated over a million dollars in revenue for his small business clients. Coming from a musical family, (his father was lead saxophone player for Rock and Roll pioneer Little Richard) Bryan has always had a rare talent for making music. Along his journey he found that artists like him who have a disdain for the music industry have to master marketing as a necessity. His passion has lead to falling in love with marketing and coming up with the S.A.M. Method; a digital marketing framework that any creative entrepreneur or business owner can use to grow their business. Bryan is also co-founder of Uncord Technologies which has built an order ahead app for food trucks.
PrevPrev5 Essential Elements of a Successful Money Making Website
NextChoosing a Web Host: The Top 5 Not So Common Things to Look forNext